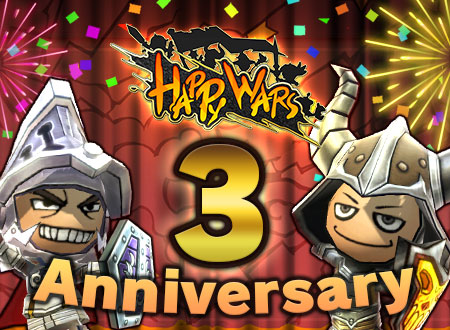 Toylogic Inc. is holding“The Third Anniversary: Three Big Campaigns” to celebrate the third year for ”Happy Wars” on Xbox One and Xbox 360 versions from October 22 (Thursday) to November 17 (Tuesday).

“Happy Wars” is a free-to-play large scale multiplayer online action game.It started been delivered on Xbox 360 in October 2012 and on Xbox One in April 2015. The game has a record of total eleven million downloads.

Play with comical characters such as Warrior, Mage, and Cleric and enjoy with players from around the world in exciting castle sieges and spell slinging. You can customize characters by leveling up and collecting items that have more than 1000 different kinds of items.

A plan for “The Third Anniversary: Three Big Campaigns” is the first campaign: “Halloween Styling Campaign” the second campaign: “Let’s Play with the Developers,” and the third campaign: “Happy Lottery.”

“Halloween Styling Campaign” is a special campaign where users equip their characters in Halloween theme, take screenshots, and post them on Twitter or Facebook. Some of the best screenshots will be introduced on “Happy Wars” official site, and picked 30 users will receive ”Happy Wars” original T-shirts as a reward.

The campaign period for “Halloween Styling Campaign” is from October 22 (Thursday) UTC 9:00 to November 1 (Sunday) UTC 9:00.

Moreover, as a token of appreciation, ”Happy Wars” will give out all players 80 Happy Tickets and one 7 Day Premium Membership.

Happy Tickets are paid in-game content, and they can be used to play “Happy Cards,” a game mode where players can have a chance to obtain Premium Items, can be used to obtain customizable parts and support items to level-up characters and equipment. Premium members have a lot of privileges while the membership lasts.

“Halloween Campaign” is also going on!
Stages are decorated in Halloween theme, and all players can receive monster design helmets based on Werewolf, Vampire, and Frankenstein.

Both campaigns run from October 22 (Thursday) to November 4 (Thursday).
You can receive all gifts when you play ”Happy Wars” during the period.